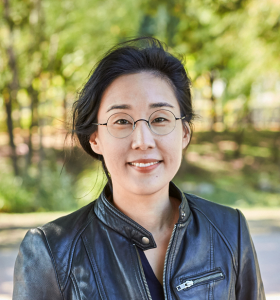 Angie Heo is Assistant Professor of the Anthropology and Sociology of Religion at the University of Chicago Divinity School in Chicago, USA.  Her work focuses on religion, media, and political economy, and she has carried out fieldwork in Egypt and South Korea.  She is currently researching Evangelical Protestantism and historical configurations of missionary capitalism in the Korean peninsula.  For the past decade, she has worked on Coptic Orthodoxy and material cultures of imagination in Egypt.  Her recent book is The Political Lives of Saints: Christian-Muslim Mediation in Egypt (University of California Press 2018), and she has authored articles and special issues in American Ethnologist, Comparative Studies in Society and History, Journal of the American Academy of Religion, Material Religion, and The Journal of Religion.  She has received grants from the National Science Foundation, the Social Science Research Council, and the Korea Foundation.

Prof. Heo is broadly interested in global religious movements, inter-religious relations, postcolonial studies, and minority politics.  She has taught courses on religion and economy, gender and sexuality in the study of religion, and theories of secularism and secularization.  She has advised masters and doctoral theses on religious minorities and nationalism, ethnographic approaches to theology, refugee and migration politics, among other subjects.  For more information, see her university website: https://divinity.uchicago.edu/directory/angie-heo.