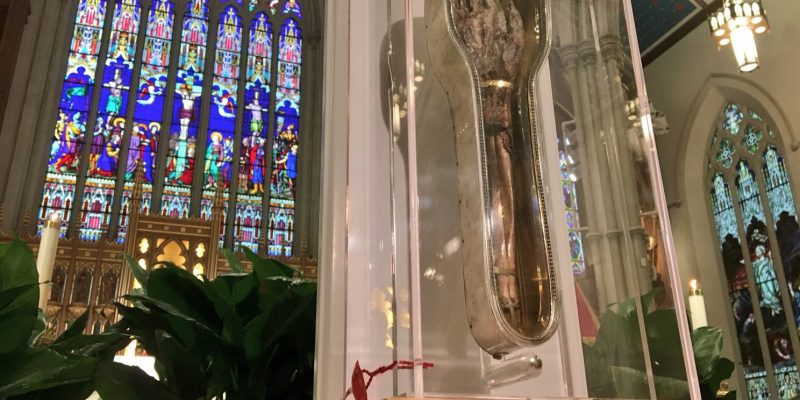 A large flock of devotees, many of Philippine and Asian origins, gather together in celebration for the touring relics of one of the founders of the Jesuits, Francis Xavier. Over the course of the evening and over the following days people line up in thousands to touch the case containing relics from the right arm of the saint.

During the homily, the leading priest calls on his flock to kindle the ‘fire of the heart’, which sounds like an appeal for a form of ‘spiritual citizenship.’ The theological and theatrical intent is both to foster a sense of belonging among first- and second-generation Canadian immigrants to the Mother Church, and to sanctify Canadian soil through the saint’s presence. In other words, the priest draws on an older theological vocabulary to address questions of belonging, reproduction, and civic engagement that have vital contemporary resonances.

This was a generative ethnographic example, demonstrating how the articulation of rhetorics and practices of sovereignties can claim affectively charged ‘re-attachments’ to soil, localities, and nations.

At the heart of the Entangled Worlds: Sovereignty, Sanctity and Soil project is an investigation into how divine presences are being made salient anew in religious and political realms, embedded in long histories but also contemporary sensorial apprehension of places. A second dimension involves the recognition that these developments often present profound challenges not only to religious and political leaders but also to members of the academy.

How are plausible bases of analytical and ethical judgement to be suggested by scholars in the light of profound dissensus over the foundations of social, political and epistemological authority? What is urgently needed, in the training and research of both scholars and students, are new forms of ethical engagements that take seriously, but not partisanly, the politics of sensing the divine by different social constituencies.

Our collaborative project aims to shape important and original approaches to the ‘sovereign’ connections between soil, space, belonging, authority, and sanctity, and in the process to reshape relations between anthropological and theological sensibilities and projects. In doing so, we propose to bring together disciplines and institutions that have often existed in mutual isolation.