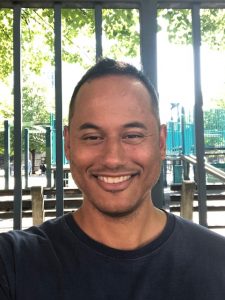 Just before giving his talk “Populism and the Contemporary Human Condition,” at the University of Toronto, Yale’s Daniel Steinmetz-Jenkins spoke with us on the religious and existential dimension of populism. With most explanations for populism being political or economic in orientation, this talk argues that analyses of the world-wide populist revolt have too often excluded the question of human meaning in a world of increasing automation and dizzying societal changes. Taking this as an entry-point, the talk recalls older populist movements of the twentieth century in which intellectuals and thinkers on the Left went out of their way to provide answers not only for political and economic crises but also the crisis of the human condition.

In bringing together religious and existential dimensions to the study of populism, what are you trying to argue?

Fizza Joffrey: [What will you be speaking about today?]

Danny: The talk that I’m giving today is called “Populism and the Human Condition.” I am mostly interested in trying to figure out the connection between religion and populism today, and more generally, how this relates to the larger question of the contemporary human condition. In particular, I’m interested in why, in places like Brazil with Bolsonaro, Turkey with Erdogan, and throughout Europe, perhaps most notably with Orban in Hungary, there seems to be a rather strong relationship between religion and populism. And even though I think many would probably not consider Putin a populist, it seems like the populist leaders in the countries I just mentioned very much look up to him. And one of the reasons they do so, is that the kind of traditionalism he espouses provides a form of resistance against the incursions of Western values, or secular values.

So one of the points of the talk is to try to figure out why the relationship between religion and populism has not received more attention, at least by academics, given how strong the connection between the two is. Take, for instance, well-received books on the subject, such as [Jan-Werner] Muller’s book What is Populism, John Judis’s book The Populist Explosion, or Federico Finchelstein’s book on populism [From Fascism to Populism in History] . None of these books offers any real analysis of the religious dimension of populism, which is a rather strange thing to ignore given the fact that religion has played such a key role in today’s most successful populist movements. I try to argue in the paper that most explanations for populism are either political or economic: in terms of politics, it’s really a problem of representation – people don’t feel like the main parties are representing them anymore, and then some guy from the outside comes in and says I can; or the economic elites are preventing a fair distribution of wealth and hence the need for an outsider to fix the economic system. I think all those explanations are powerful, but they need to be accompanied by a third element, an existential one, which involves the question of how to make sense of our lives in a world of ever-increasing automation, ever-increasing technological changes, where traditional modes of self-understanding are breaking down.

I [want to] try to argue in this paper that political and economic explanations fail to address the existential side of populism. And one of the reasons why populists on the right are successful is that they are typically better at doing this regardless of what their real motives are.

Danny: Well I think one of the things you’ll find on both the liberal-left and the right is the idea that capitalism has gone amuck, and it’s breaking down the social fabric of societies, and there are different ways to provide solutions to this. So you have people on the left and liberals too who argue that one way to hold the international financial system in check, is through a return to nationalism. There are populists on the right who argue that modern societies have become too secularized, and that there is a need, therefore, to revive traditional sources of meaning. This type of right-wing rhetoric, whether it is sincere or not, can have a real influence on religious traditionalists; one simply needs to look at Hungary, Turkey, India, or Brazil for proof of this.

Steve Bannon, in fact, sees in the so-called Judeo-Christianity in the United States, a way to kind of curb the excesses of global capitalism via the restraining effects these traditions can have on buffering ill-advised spending and excessive life styles.

Such theo-political perspectives, or even theodicies, explain how and why things politically and economically unraveled, seem rather typical of right-wing populists. Even if such solutions are all rather imaginary, they resonate strongly with a traditionalist sensibility. To use the language of Karl Polanyi, the right-wing populists in some ways are attempting to embed capitalism within some kind of religious traditionalism. So religion for these people serves as some type of functionalist solution. Again, whether a right-wing populist actually believes any of this is a different matter. What is clear is that the religious traditionalists often do make these types of connection, which resonate strongly with their conservative religious constituents.

A return to the good old days, of Judeo-Christianity, Islam, Evangelicalism, Catholicism, Hinduism, and so forth provides the solution for a political and economic instability. Notice that this is, in some shape or form, grounded in a theological view of things that goes beyond mere economics or politics. Given this, I am interested in the left-liberal approach to the existential dimension of populism – something that goes beyond, even as it profoundly influences thinking on distribution or the fight for recognition. What is its ideology or mythology for the human condition today – something that’s not religious but something that provides some kind of story or narrative about the meaning of life? I think addressing the existential dimension of populism can greatly enrich the economic and political approaches to populism that seem to be dominating the academic literature. So I offer a three-pronged approach to populism.

Consider, for instance, that Weimar Germany is regularly compared to today’s populist moment, even though there are very good reasons, as my colleagues Udi Greenberg and Daniel Bessner have demonstrated, for rejecting this historical analogy. Yet for the sake of my argument, the very moment that Germany experienced economic and political instability, happened at the same time that existential philosophy and theology became all the rage here. Of course, it was during the crisis of Occupation, and after World War II, that existential thought dominated French intellectual thought, and in particular, the attempt to reconcile Marxism with existentialism. In other words, these were people who realized the crisis of human meaning in modern societies, and also were dedicated to the pursuit of economic and political equality. It is interesting that the existential approach dies down by the 1970s, as the economic is prioritized above all. Of course, this coincides with the rise of neoliberalism, which might not be a coincidence.

The Connaught Global Challenge Initiative: Entangled Worlds: Sovereignty, Sanctities and Soils thanks Dr. Danny Jenkins for the time to discuss these very important themes that are central to the ideas of our project.