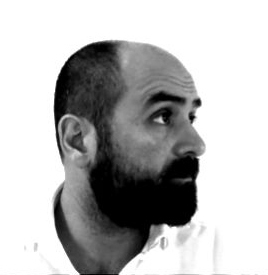 Petros Babasikas is an architect, writer and educator. His work explores connections among architecture, storytelling, media and public space. He is Assistant Professor, Teaching Stream at the John H. Daniels Faculty of Architecture, Landscape and Design and founding partner of Drifting City studio, based in Athens, Greece.

Petros’ ongoing research includes 6Place Toronto, an interdisciplinary project funded by UofT’s Mcluhan Centre and School of Cities investigating significant urban spaces where media and infrastructure intersect with architecture and public space;  “Urban Commons,” a DIY urbanism project and network for outdoor spaces in Mediterranean Cities; and The Tourists, a series of collective multimedia exhibitions and publications working on the intersections of Global Migrations and Global Tourism as a subversive tourism campaign.

Petros’ design projects include Catch the Light, a public space project for the Athens Olympics; Kapnergati Square Area & Park in Kavala, Greece; ELIKA Gallery in Athens; residences in Greece and California; Drip, a vertical garden pavilion for the London Olympics; Rock, a sonic garden for the Santozeum Museum; and the Webby Award-winning webpage and interactive garden dreamgrove.org.  His works have been exhibited, awarded and published internationally.  His essays on public space, urban crisis landscapes, global housing, the Mediterranean Metropolis, agoras, gardens and monuments, and contemporary lens-based art have been published in 6 languages.

Petros was co-editor of the 2014 exhibition catalogue and essay collection “Depression Era” and co-curator and coordinator of the Depression Era Project, a collective documentary/storytelling experiment on the urban and social landscape of the Greek Crisis.  He is associate member of the International Academy of Digital Arts and Sciences and Vice-Chair of UWC Greece. He holds a BA in Architecture and Comparative Literature from Columbia University and an MArch from Princeton University.