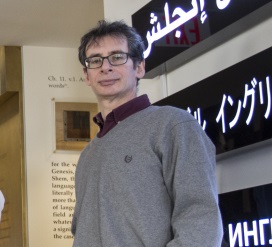 Simon Coleman is a Jackman Professor at the Dept. for the Study of Religion, UofT, and President of the Society for the Anthropology of Religion, American Anthropological Association. His work focuses on the globalization of religious forms, urban religious practices, and pilgrimage, and he has carried out fieldwork in Sweden, the United Kingdom, and Nigeria. He is currently researching English cathedrals and contemporary forms of religious mobility (funded by the Arts and Humanities Research Council) as well as the contribution of religious organizations to urban infrastructures in West Africa (British Academy). Recent publications include the co-edited volumes The Anthropology of Global Pentecostalism and Evangelicalism (New York University Press, 2015) and Pilgrimage and Political Economy (Berghahn, in press). He is a current editor of Religion and Society and a former editor of the Journal of the Royal Anthropological Institute. He has published special issues and articles in, among others, JRAI, Current Anthropology, Ethnos, Anthropological Quarterly, Anthropological Theory, Critical Inquiry, and South Atlantic Quarterly. He will be the 2018 Henry Myers Lecturer on the Place of Religious Belief in Human Development, Royal Anthropological Institute, held at the British Museum.