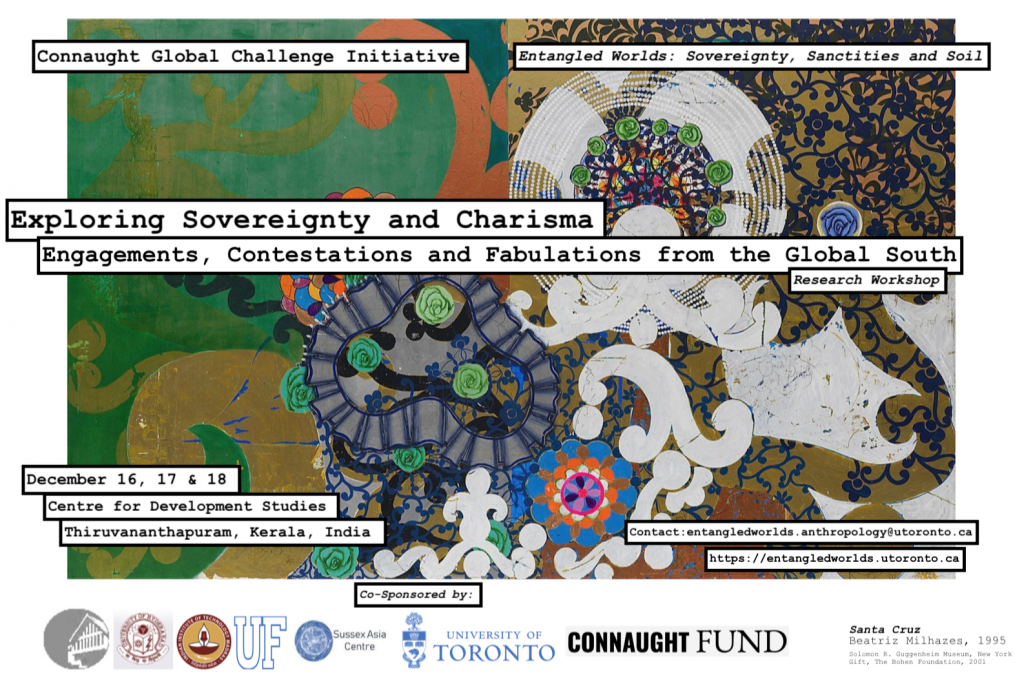 Exploring Sovereignty and Charisma: Engagements, Contestations, and Fabulations from the Global South

In recent years much research has focused on ways through which religion has engendered intolerance and even violence, unsettling the tenets and institutions of secular modernity. Whilst a growing body of scholarship has begun to explore critically how theologies and religious practice have contributed to the constitution and reproduction of the modern itself— ontologically as much as practically—the focus has been primarily, and in somewhat anachronistic fashion, on the historical foundations of Judaeo-Christian theological traditions. To boot, the concepts and analytics routinely mobilized to explore relations between religion and modernity draw (perhaps inevitably) on intellectual and discursive traditions deeply embedded within the same ontologies they seek to account for, namely those emerging—and spreading through colonialism and conquest—from western European and north American contexts. Redressing the shortcomings of such an apparent ethnocentric analytical circularity requires the mobilization of different intellectual traditions and diverse historical experiences and archives, through which apparently familiar categories such as, for instance, “religion”, “secularism” or “modernity” are constituted, debated and contested. We suggest that the historical experience of the south Indian state of Kerala can contribute to a much-needed re- focusing of existing scholarship and debates. Not only does it underscore the complex articulation of religiosity and religious practice within and between different religious communities and traditions, but it also provides an entry point to explore and theorize foundational relations between “religion” and the modern in the context of religious heterogeneity, colonialism and global capitalism.

Kerala is often represented as a unique instance of a relatively peaceful coexistence of multiple religious traditions over several centuries, and of their articulation with secular modernity. Indeed, the peculiarities of modern Kerala have been attributed simultaneously to an underlying historical culture of tolerance, which allowed both for the development of a shared religiosity and for the integration of different religious communities within existing polities; and to the consolidation of secular and progressive politics in the state that have foreclosed the emergence of organized communalism and religious intolerance. Recent critical studies have interrupted such a dominant and celebratory popular rhetoric, delineating instead the contours of a history in which relationships between different religious traditions were constituted simultaneously on mutual intelligibility and reciprocal borrowing, as well as on intense competition and antagonism. At the same time, emerging scholarship has explored ways through which these religious traditions and the religiosities they engendered, fostered modalities of moral reasoning, technologies of public debate, and forms of political representation and social action that significantly shaped contemporary Kerala modernity.

It is clearly the case, then, that Kerala’s history and contemporary configurations of relationships between different religious communities/traditions has an import for scholarly debates beyond India and South Asia as a whole. Firstly, Kerala’s religious heterogeneity suggests that theologies and religious practices are not simply constituted or experienced through differences and contestations within specific religious traditions, but also as the outcome of engagements and encounters with Others, whether religious, ethnic, secular or political, both locally and globally. This complex and non-linear history unsettles all too common attempts to reduce (historical or contemporary) religiosity either to bounded theologies and traditions, or to demotic syncretism. Secondly, Kerala provides the empirical and conceptual ground to explore the processes through which multiple and inchoate religiosities might acquire coherence and substance in different historical circumstances as quasi-hegemonic “traditions”; at the same time, it draws us to consider the orientations and practices of those who imagine their ethical lives alongside or outside the confines of religious orthodoxy. Thirdly, the heterogeneity of religiosity and religious practice in Kerala, as well as the complex historical relationships between religious and political communities in the state, bring to the fore questions concerning the articulation of different notions of sovereignty, legitimacy, and charisma, and how these are constituted or practised within and across different social and material terrains. Fourthly, Kerala’s historical and contemporary experiences underscore ways through which religious discourse and practice en-gender the everyday in multiple and often divergent ways. Finally, paying attention to the “banalization” of religion in public and private life in colonial and post-colonial Kerala invites us to develop novel, empirically-grounded analytics to theorize the constitution and working of modern secularity/secularism beyond the constraints of European or North American intellectual archives and histories.

This workshop, then, has a wide and open-ended agenda that aims to interrogate the historical as well as contemporary dynamics that have constituted a unique Malayali modernity by analysing the complex articulation of theological, political and economic transformations within different religious traditions, and the ways they might work towards constituting contingent communities and (counter)publics. It seeks to draw out instances of mutual borrowing, as well as contestations and dissent between these traditions and so-called secular modernity. The workshop intends to problematize how these interactions and the resultant discursive as well as structural transformations in Kerala society produced specific manifestations in the pre-colonial, colonial and postcolonial contexts. Moreover, it aims to understand the current globalized, late capitalist moment where these religious traditions and religiosities are embedded in and simultaneously shape economic, political as well as social practices.
The workshop is jointly organized by J. Devika (CDS), V.J. Varghese (HCU), R. Santhosh (IIT Madras), V. Napolitano (Uni of Toronto), S. Coleman (Uni of Toronto), B. Soares (Uni. Of Florida) and F. Osella (Sussex Uni). It is supported by a generous grant from the Connaught Global Challenge Initiative (University of Toronto), as well as from contributions from the Centre for Development Studies, Hyderabad Central University, Indian Institute of Technology Madras, University of Florida, and the Asia Centre at Sussex University.